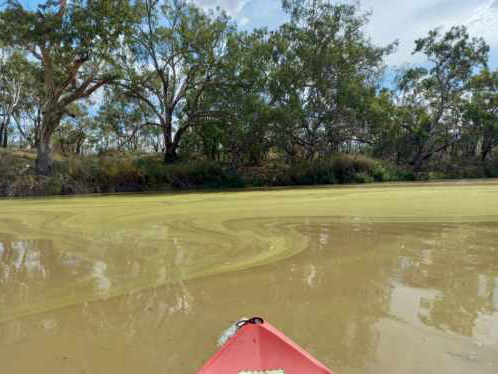 Water campaigners called on NSW Parliament to oppose the Coalition Government’s bid to allow massive floodplain harvesting of overland flows which will jeopardise the survival of the struggling Murray Darling Basin.

Water for Rivers spokesperson Tracey Carpenter said, “Any bid to license the current excesses in the capture of floodwater in massive private dams threatens the survival of rivers. It’s a replay of the wild west where public water is stolen for private use. The Government must represent the people of the river and protect their environment – not just sell off our resources to big business.”

Existing water allocations already remove too much water from the rivers. Taking more by stopping flood water from getting into the rivers will be a disaster for rivers and wetlands and make the whole system collapse.

Floodplain harvesting captures flood waters flowing across the flat plains of the north-west of NSW and Queensland using levees and other irrigation channels. The water is then diverted into enormous on-farm storages and used primarily to irrigate cotton or it is held by speculators trading for massive profits as the rivers decline and droughts accelerate.

NSW Water Minister, Melinda Pavey’s plans to legalise floodplain harvesting have been rejected twice already. “Handing out licenses now after this big water grab will lock in the over extraction and further alienate and privatise water in a water market that is failing all in the Basin,” said Carpenter.

Rules have not been enforced and there’s no accountability to water sharing plans.  Both the Queensland and NSW government have shown they are determined to put the profits of big business ahead of any national water agreement.

The Wentworth Group of Concerned Scientists report in September 2020 showed 20% of flows expected under the Basin Plan did not arrive to sustain collapsing wetlands listed with the international RAMSAR convention to protect significant wetlands.  Illegal and legal pumping of water for agribusiness and floodplain harvesting has robbed the river system of cultural and environmental flows. The result is blue green algae blooms, fish kills, toxic water and rivers bone dry and dying.

Charlee-Sue Frail, Ngemba woman and co-founder of the Brewarrina Mission Working Group and water advocate said, “There’s grave concern about this legislation coming into effect and real interest from the First Nation’s community in mobilising up and down the river.”

“Aboriginal people represent a very large majority of the population in the northern basin and yet we control less than 0.2% of water.  There’s a multi-billion-dollar industry being created out of this water knowing full well that the river can’t sustain the over extraction at the current level of industry.”

“It just astounds me that policies exist that allow irrigators to take five times their entitlement. The river should not be in debt to irrigators.”

“The river is in a really bad state; it’s not sustaining life like it has and there is a great concern about what its future might look like. It appals me that they are jeopardising the rivers that sustain over two million people in the Murray Darling Basin,” said Frail.

“We all have an obligation and a responsibility to care for it and to speak to the power brokers to ensure that they look after it. We can’t take the foot off the pedal, even with a little bit of rain it’s not going to restore the river to how it was in the past. Everyone has to keep across this issue and keep fighting for the River,” said Frail.

Water for Rivers is calling on supporters of water justice to phone Melinda Pavey and their local members to demand they oppose the Water Management bills such as Pavey’s current proposed “Exemption for Rainfall Runoff Collection” and outlaw the extension of floodplain harvesting.

“Water should not be a commodity. We demand water be taken off the market and water trading ended in Australia. We demand an immediate embargo on river diversion, flood-plain harvesting and the pumping of rivers by irrigators upstream,” said Menindee and Wilcannia based Aboriginal and community water campaigners in a letter to the Prime Minister of Australia,  NSW Water and the Water Minister, Melinda Pavey in March 2020.