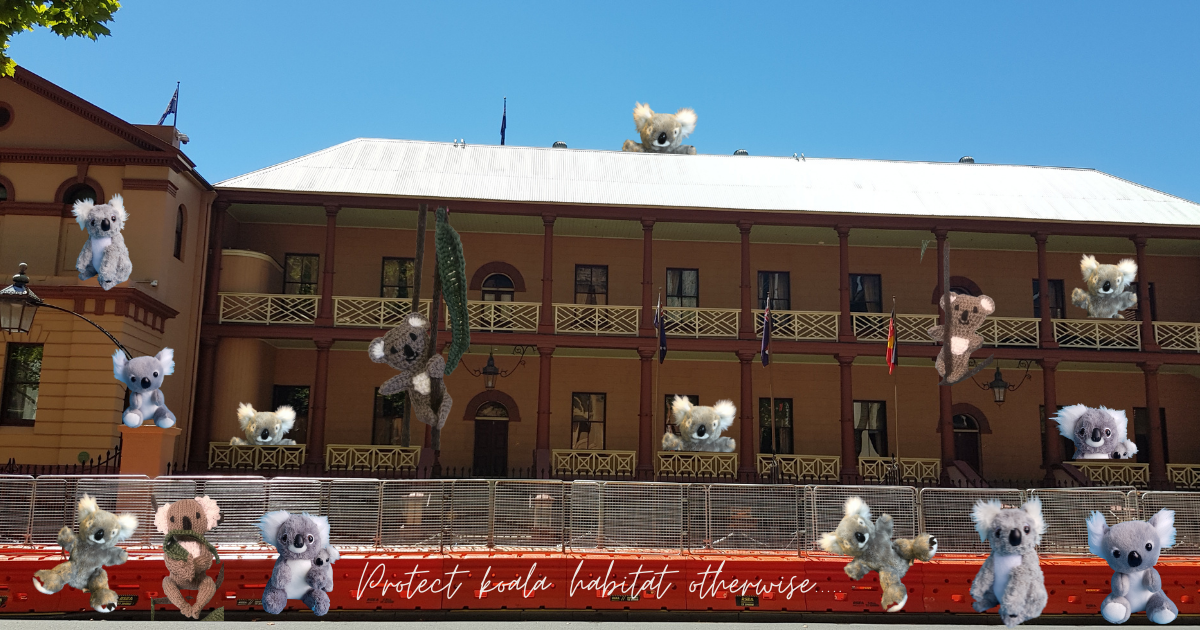 In November last year, the Local Land Services (Amendment) Bill 2020 was narrowly defeated when the Honourable Catherine Cusack lived up to her title and crossed the floor to put the survival of the Koala species ahead of her party loyalty.  Sydney Knitting Nannas and Friends commend the Hon Ms Cusack for joining with Labor, The Greens, the Animal Justice Party and Independent Justin Field in voting against this Bill which would have hastened the demise of the Koala by allowing virtually unfettered clearing on private land.

Now, instead of rewriting the Bill in a way which would actually protect the Koala, the Government has stated their intention to revert to an outdated State Environmental Planning Policy known as SEPP 44 and to amend that as they see fit. This is a Coalition tactic to bypass Parliament because they didn’t get what they wanted from the vote on the Bill. The Nannas are extremely cranky about this subversion of the democratic process, and we expect that you are too.

In July 2020 the Upper House Portfolio Committee No 7 released its findings from the “Inquiry into Koala Populations and Habitat in NSW” (*1). In December 2020 the Government released its Response (*2). The fact that this occurred after the attempt to legislate on Koala habitat makes the Nannas extremely sceptical that the Government is sincere in their stated aim to double koala numbers by 2050.

In the Introduction to the Response, the Government claim that they are “working with the Office of the NSW Chief Scientist & Engineer”. However, they then go on to cite the Draft Cumberland Plain Conservation Plan (*3) as an example of this collaboration. They fail to mention that the Cumberland Plan ignored the Chief Scientist’s advice (*4) that two East-West koala corridors be created as well as the North-South one which was proudly trumpeted in the Plan.

The Government Response accepted only 11 of the Inquiry’s 42 recommendations. The Nannas believe that this is an inadequate response, considering that the Committee received input from the most eminent Koala experts in NSW including the Chief Scientist. It is completely inadequate, too, in the light of the Inquiry’s finding that under current conditions the Koala will become extinct in NSW before 2050. Portfolio Committee No. 7 had a multi-party composition, and all their recommendations were majority decisions. Almost all were unanimous. It is telling that the Liberal Party member who crossed the floor, the Hon Ms Cusack, was a member of the Committee and so could not ignore the facts.

While the Knitting Nannas believe that all recommendations of the Inquiry should be incorporated into any new Koala SEPP (or preferably new legislation), we would like to draw particular attention to several of these.  The first is Recommendation No. 1 which deals with the central importance of a consistent, scientifically valid survey of Koala numbers being done. It is vital that current numbers and locations are obtained, since previous figures were published before the destructive 2019/20 bushfires.

Since approximately 70% of remaining koalas live on private land, No. 40 is also a key Recommendation. It urges that “the NSW Government work with willing landholders to identify koala habitat that is of outstanding biodiversity value under the Biodiversity Conservation Act 2016 in order to facilitate more koala habitat on private land being protected”.  No. 40 is accompanied by No. 39, an increase in incentives to private landholders to undertake conservation. Nannas have observed that farmers are often conservationists by nature, and would welcome support for innovative programs such as ecotourism that made it financially feasible to retain native vegetation and koalas. The carbon storage provided by intact trees and the biodiversity values of core Koala habitat could also attract stewardship payments which would exceed the payments for destructive private forestry. Solutions which protect koalas as well as the interests of farmers are a practical possibility.

Another key Recommendation of the Inquiry is No. 41, to enable the creation of the Great Koala National Park. This is a proposal made by the National Parks Association of NSW for Australia’s first national park dedicated to protecting koalas. It would consist of a network of existing and new national parks in the Mid North Coast area, adding 175,000 hectares of publicly owned forests to existing protected areas to form a 315,000 hectare reserve. At present, less than 10% of NSW is conserved in national parks and reserves.

Recommendation No. 9, that the Government secure the Koala population at the proposed Shenhua Watermark mine site before approving the coal mine, recognises the hugely destructive effects of mining and climate change on Koala habitat.

The Nannas hope that those Recommendations which have been accepted by the Government, such as No. 6, the protection of old growth forests from logging, go on to inclusion in the new SEPP (or legislation). We also hope that the Georges River Koala Reserve which has been announced as part of the draft Cumberland Plan (*3) will be part of a wider system of wildlife corridors which provide a secure habitat for the South Western Sydney koala population with access to the Blue Mountains, not the truncated and enclosed version proposed by the Plan.

Sydney Knitting Nannas & Friends are extremely concerned and worried about the future of the beloved Koala and the bushland which forms its habitat and that of countless other creatures.