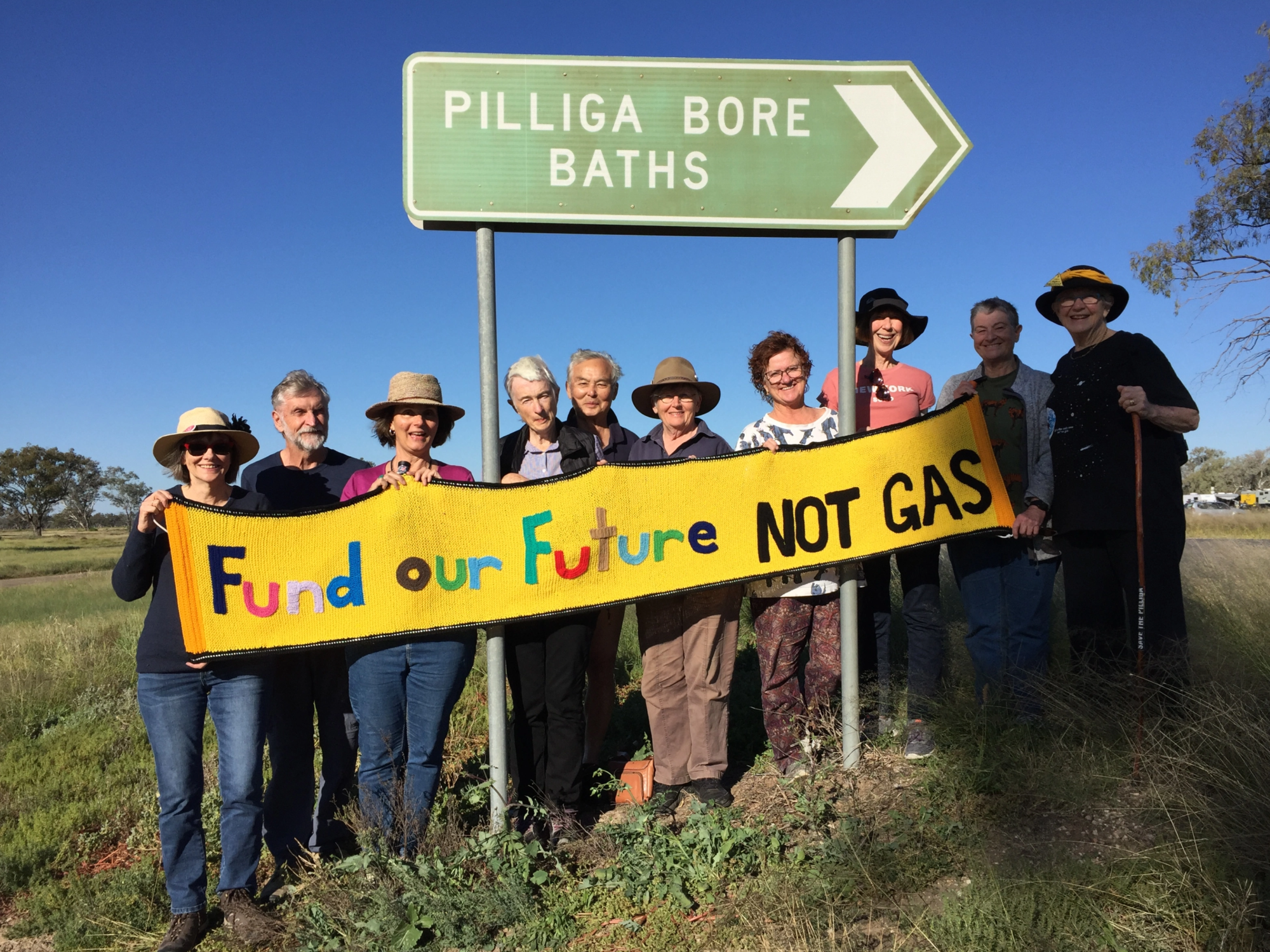 Sydney Knitting Nannas and Friends’ first stop in Warren was at the Window on the Wetland Centre (WOW). An information centre built around an old church moved from the town.

Needing to stretch our legs we went off on the nearby walk around Tiger Bay Wetlands. A lovely walk with dead trees silhouetted in the ponds.

The caravan park where we had booked a cabin had no power. The metre board had blown up underground and there is a tussle between the energy supplier, the council and getting permissions to do the repairs. A huge generator kept the lights on.

Nannas were hosted for dinner by members of the Warren Action Pipeline Group at the WOW where they also volunteer. These local women will be impacted by APA’s Western Slopes Pipeline should it go ahead. The pipeline would go through a flood plain with remnant vegetation which can be underwater for a long period of time. It doesn’t take much to change the flood plain flow. This area also has vertisol soils, commonly known as black soil, which is very boggy and prone to deep cracking. This makes the area unsuitable for pipelines. The pipeline would be 30 metres wide and the company is able to access this at any time.

Video of Di Perry of Warren Action Pipeline Group at a diner at Window on Wetlands in Warren on Tuesday evening.

Sydney Knitting Nannas and Friends were advised to leave Warren early to see the most birds at the Macquarie Marshes. We tried but unfortunately we didn’t get to “Burrima” early enough. ‘

“Burrima” is a private property with a 2km boardwalk across the marshes. It is along the Carinda Road, a bitumen road but quite narrow in parts, with cattle grids that beep at you as you go over them. You pay $25 per car to enter the area and are given a pin code to open the enormous gate.

This is a wonderful place to view the marshes and as there has been lots of rain it is very lush.

We retraced our steps back to Gibsons Way to Monkey Bar Creek. Here water crosses the road and it’s a popular bird feeding ground. Only one of our vehicles was high enough to cross this creek so the rest went on to Carinda and then on to Coonamble.

Nanna Kathy grew up on a property on the Pilliga Road near Coonamble. Sydney Nannas and Friends spent a morning driving around the property, listening to her brother Don talk about life on a farm and the importance of the Great Artesian Basin to this area for drinking water for stock. It’s too salty for irrigation.  We saw how the cap and pipe system works and were told as a consequence of this the bore water pressure had returned.

Farmers are busy sowing crops of wheat and barley at this time of year. The tractors pulling machinery are well equipped with air-con, tv, radio and are directed by satellite navigation. They hardly stop except to fuel up or for repairs when the conditions are right to sow. New sowing techniques have reduced diesel consumption substantially in recent times.

The mice plague has decimated hay storage and even the local shops are losing stock as the mice eat through whatever packaging they can.

Nannas drove on to the Pilliga bore bath where most indulged in a soak in the warm water. This is a popular camping spot for grey nomads with flash new caravans.

We drove on to Narrabri stopping at the CSIRO Telescope on the way.

A Petroleum Exploration Licence (PEL) 434 hangs over the heads of the Coonamble people. On Wednesday the NSW Government moved to send Justin Field’s zombie PEL Bill to extinguish the expired coal seam gas licences of the North West to a committee inquiry. The Committee has until 12 August to report on the Bill and the second reading debate and vote on the Bill will be held off until that report.

Sydney Knitting Nannas have long been campaigning to get the Zombie PELs of the north west cancelled. For more info read our Zombie PELs Explainer

Sydney Knitting Nannas and friends arrived in Narrabri on Thursday. The next day they visited Geni Energy’s shop in the centre of town. Sally Hunter explained how the company was transitioning NSW’s northwest to a renewable future.

A bit further down the street Santos’ shopfront is unattended, making it easy for Nannas to get the obligatory photo.

Some Nannas have visited the gasfields on many occasions so instead they chose to do a fish feeding tour at the Narrabri Fish Farm located 12km from Narrabri on sealed and unsealed roads. This is one of many established enterprises in the area that will be devastated if their bore water is contaminated.

Nannas new to the area went for a short tour of the gasfields in the Pilliga State Forest where more locked gates have been erected preventing the public from entering what is supposed to be public land. The roads had recently been graded but we saw no vehicles or signs of activity, no noise, no flare, but everything looked clean and tidy and lots of new plantings on the spill sites. We concluded VIPs were about to visit or had been there recently. We had a sandy picnic lunch in Bohema Creek in which Santos is expected to get rid of treated water in flood times.

A black snake crossed the road on our way to the gasfields so some Nannas decided this was a sign to visit to the Black Snake Distillery, 10km from Narrabri on Kaputar Road. Other Nannas went to Sawn Rocks, a favourite picnic spot.

Our first stop was at a natural spring on the road from Coonabarabran to Baradine where Suellyn’s granddaughter, with clapsticks, welcomed us to country in language. Then the welcome was repeated as Suellyn translated it into English.

Suellen explained the importance of this spring to Aboriginal people. Coonabarabran was one of many country towns to run out of water in the last drought and the council had to sink several bores to obtain water.

To see the source of the water, the intrepid Nannas walked up past a manmade dam then further on to where water trickled out of the ground near a rock.

We did an unplanned stop at an unmanned pumpkin stall with an honesty box before pulling off the road and look back over to the Warrumbungle Mountain range. Suellyn pointed out the shape of a wombat in the landscape. She told us a story about this wombat, which has a message for all about greed and sharing.

We were greeted at the Baradine Discovery Centre by National Park rangers saying “yaama”. This architecturally designed, environmentally sustainable building houses interactive displays on the Pilliga Forest and Aboriginal cultural heritage. The shop caters well for Nannas looking for presents for grandchildren.

The first part of the gravel road from Baradine to the Sculptures in the Scrub was very rough, then it varied, but most of it was in good condition. We had a picnic lunch, then Suellyn and her two grandchildren did a “show and tell” with traditional items made and used by the Gomeroi people. Suellyn pointed out design features enhancing functionality. Then we walked up the hill to some but not all of the sculptures as we were running out of time.

We continued on across the park on a long dirt road which was quite rough in places. It was a relief to get to the Newell Highway. For many the sandstone caves were the highlight of the trip. A photograph cannot do them justice – they are awesome, spiritual, soulful. A wonderful experience and we felt very privileged to be in this special place in the company of these wonderful Gomeroi people.

Throughout the day we were helped by Suellyn’s two delightful grandchildren along difficult tracks. They ensured we didn’t run into sticks poking out of the bush and as we walked around the caves they passed on their knowledge of the things we saw.

This group of campaigners against the Narrabri Gas Project are hoping the nearby Petroleum Exploration Licences will be cancelled soon. They are ready for action if a pipeline route from Narrabri to the coast is agreed upon.

In the meantime members of CRAG are concentrating on researching as much as they can, and making people aware of coal seam gas methane emissions and the effects this has on climate change.