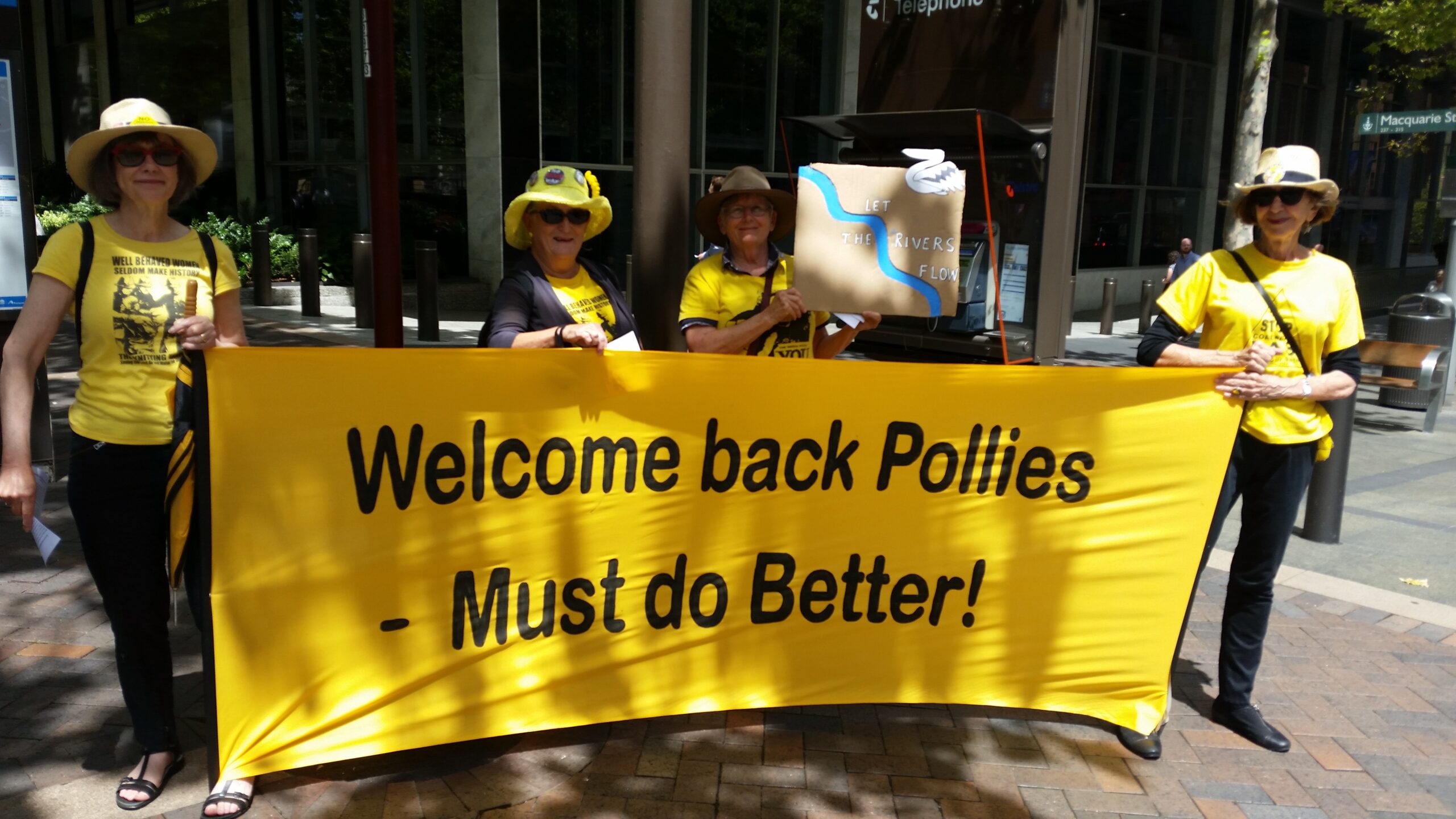 Yesterday, Sydney Knitting Nannas & Friends welcomed back both houses of parliament after the summer break. Singers and musicians entertained the public at the top end of Martin Place while Nannas talked to passers-by and handed out leaflets listing the priorities for NSW politicians in this first term of parliament for 2021. Several politicians stopped for a chat and took a leaflet, others carefully avoided us.

The Nannas also posted a letter from all the loops to Matt Kean about transparency and compliance at the Narrabri Gas Project with a list of questions for him and officers of the EPA.

The following is a copy of the leaflet:

What are the priorities for NSW politicians? Covid and …

Protect Water and Land – no gas and pipelines

The Santos Narrabri Gas Project threatens the Great Artesian Basin and other water resources in the north west. To get the gas out, two gas pipelines are proposed across prime agricultural land. The Hunter Gas Pipeline is bidding for taxpayers’ money as part of Morrison’s destructive and divisive “gas-led recovery’’. We’re asking politicians to say no to this unnecessary destruction of water and land.

Twelve Petroleum Exploration Licences (PELS) have expired in the region from Dubbo to the Queensland border but now the Narrabri Gas Project has approval the companies want to explore for gas on agricultural land. We call on the government to cancel them all without further delay.

Our river network is in peril and the Murray Darling Basin Plan is not working. Yet Water Minister, Melinda Pavey, wants to issue flood plain harvesting licences to agribusinesses which would allow them to legally take massive amounts of water from the rivers and the environment. The Murray Darling issues are complicated, but it’s clear that flood plain harvesting contributes to the drying of the river system and will destroy some of the communities which depend on it.

Here’s a link to a great explainer

Act now to save koalas from extinction

Most people are worried about koalas becoming extinct in NSW, and there are solutions: Stop the destruction of their habitat by developers and private landholders; establish koala parks and protect corridors; stop pretending offsets work and implement the recommendations of the upper house inquiry. Meanwhile the government is permitting the clearing of more habitat! Please join us at the Save Our Koalas Day of Action on Sunday 21 March Hyde Park 11am

Nannas applaud the legislation passed in November to dramatically increase renewable energy generation and storage in NSW. The plan is to bring huge investments and create thousands of jobs in clean energy.

That’s great, but it hasn’t distracted Nannas from the government’s record on support for fossil fuels. We object strongly to the approval of the Narrabri Gas Project and 6 new coal mines which will all damage water, land and climate. Here are some numbers:

Is this a government taking the action we need to protect our climate and the natural environment?

Please contact your NSW MP about water, land, air and a clean future.